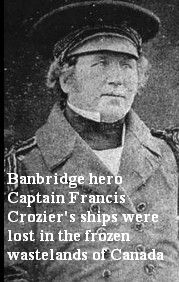 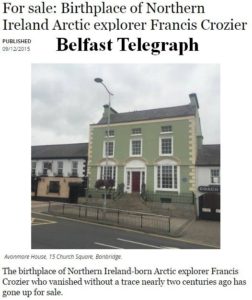 It’s a riddle that has endured for almost two centuries

Setting out to explore the 300-year-old mystery of the Northwest Passage in 1845, Captain Francis Crozier himself became an enigma of the seas.

The famous Banbridge-born explorer, two ships and an entire crew disappeared apparently without trace in this icy stretch of northern Canada – prompting an unprecedented worldwide preoccupation with finding out what happened.

Despite a massive search operation at the time, the two ships were never found. Now, nearly two centuries later, a new Canadian government-led expedition is under way to locate the wreckage of Captain Crozier’s ill-fated ships, the HMS Erebus and HMS Terror.

The 2014 Victoria Strait Expedition is the most ambitious search for the lost ships to date and will even receive support from space to analyse the movement of sea ice in the area.

Such is the level of interest in the expedition that Canadian Prime Minister Stephen Harper recently joined the search team for two days.

Second in command to Sir John Franklin, Crozier set off on his heroic mission to explore the Northwest Passage – a sea route through the Arctic Ocean connecting the Atlantic Ocean and the Pacific Ocean above Canada – in the spring of 1845.

This was a goal of Arctic explorers from the 16th century, who were convinced this was a navigable trade route to Asia that could save them lengthy and hazardous trips around South America and Africa.

But after enjoying initial success, the promising expedition soon began to falter.

All 129 men on board the Erebus and Terror eventually had to abandon ship as the vessels got trapped in the icy wilderness.

It is thought the hostile environment led to their eventual death.

According to legend, Crozier was the last man standing.

The broad circumstances of the expedition’s fate were not revealed until 1859 when a message left in a cairn on Victory Point, King William Island, was found.

The message revealed that both ships had become trapped in ice in late 1846 and had remained so for approximately one-and-a-half years. It indicated Franklin had died on June 11, 1847, while an additional 23 crew members had similarly perished under unknown circumstances.

The Banbridge-born explorer is now remembered in the town in the form of a large statue in Church Square.

As part of the 2014 Victoria Strait Expedition, a Canadian underwater archaeology team is currently scouring the Queen Maud Gulf for signs of the lost ships. With more sophisticated technology than ever before, they are for the first time exploring sections of seabed where the ships were last seen, a task made impossible until now because of thick sea ice in the area.

The Queen Maud Gulf could be the only area searchers are able to reach this year.

They had planned to reach the point of abandonment off the coast of King William Island – where one of the ships was last seen – but heavy ice cover may prevent accessing this area.

Underwater archaeologist Ryan Harris, who is heading the search team in the Queen Maud Gulf, said: “In this area, the sea bottom is flat and relatively featureless. If there’s a wreck down there, or just some debris, we’re sure to spot it.

“So far, only two objects have been interesting enough for me to take a second look at – unfortunately, both of them turned out to be rocks.”

Only 5% of the Arctic is charted, and as a reminder of the difficult conditions, the research vessel Martin Bergmann, which is part of the expedition, ran aground on a previously unknown shoal early on Wednesday morning. 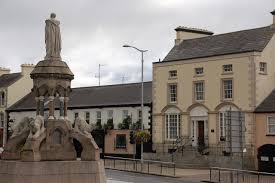 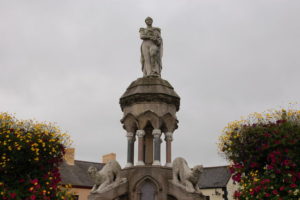 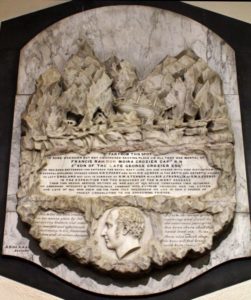 Captain Francis Rawdon Moira Crozier, R.N. (17(?) September 1796 – disappeared, 26 April 1848), was an Anglo-Irish naval officer who participated in six exploratory expeditions to the Arctic and Antarctic. Не was born in Ireland at Banbridge, County Down, in Ulster and was named after his father’s friend, The 1st …

Rating: 4.3 – ‎39 votes
Captain Francis Crozier has 39 ratings and 7 reviews. Randy said: Loved the book but I really don’t think Crozier was the last man standing. As the book …

Jul 12, 2011 – In April of 1848, while sitting in his quarters aboard the ice-encased HMS Terror in the Canadian Arctic, Captain Francis Crozier made the fateful decision of a desperate man. His expedition’s commander, John Franklin, was dead, the explorers had failed to find the Northwest Passage, and the sea ice that …