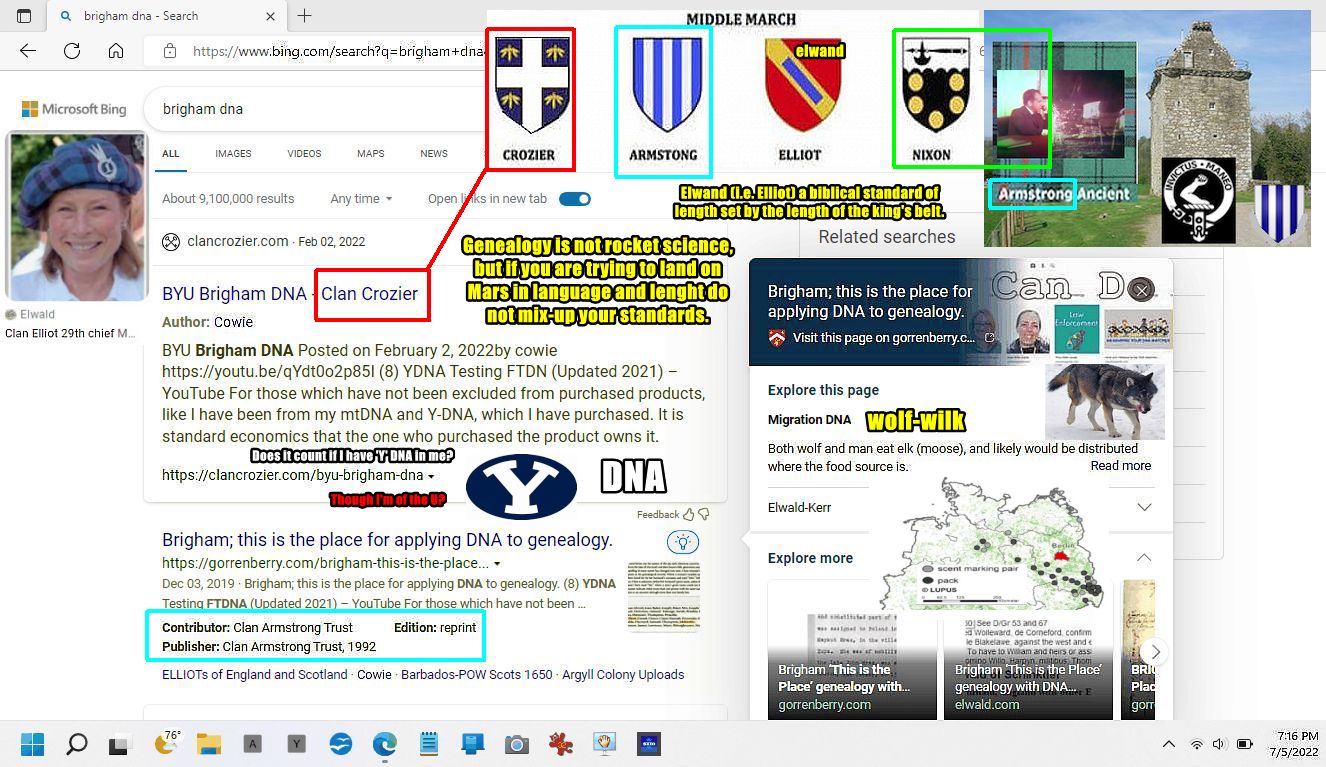 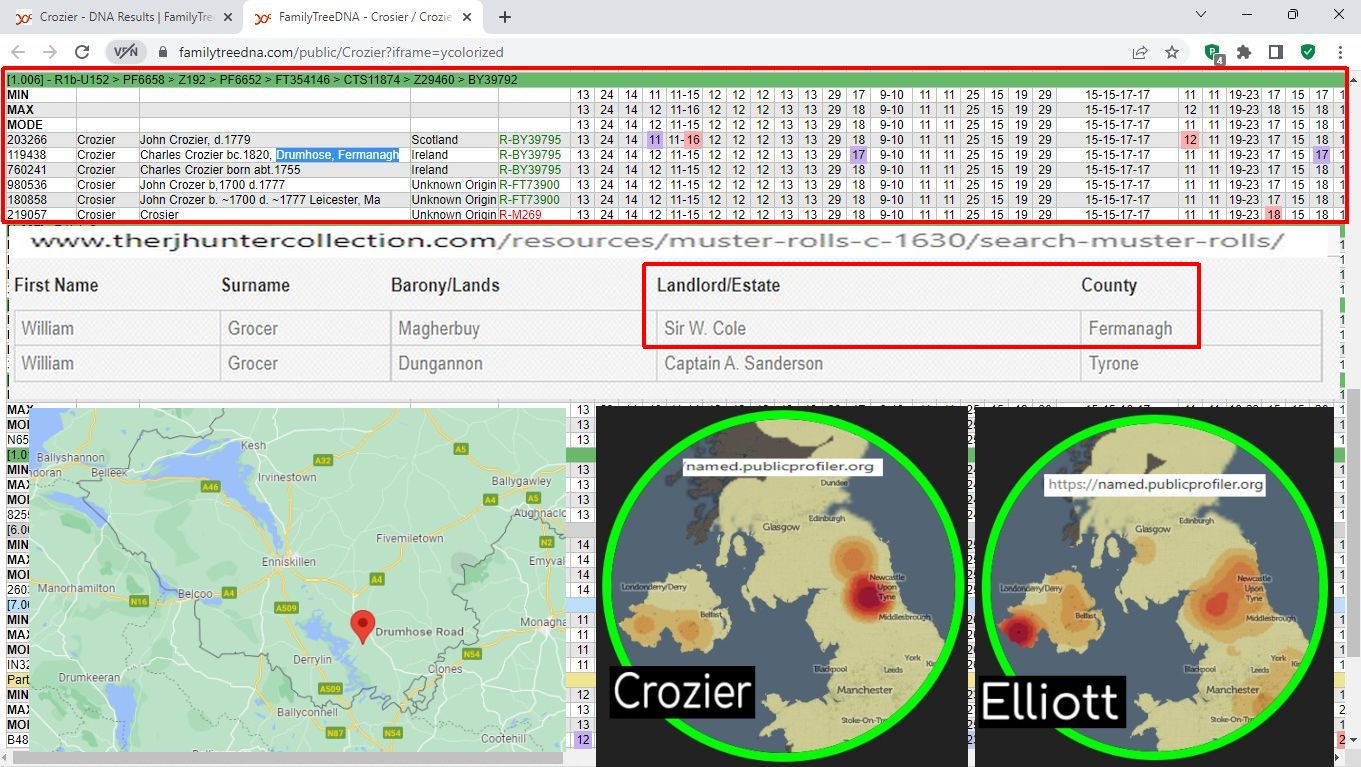 The history of Enniskillen with reference to some manors in co. Fermanagh, and other local subjects : Trimble, William Copeland, 1851-1941 : Free Download, Borrow, and Streaming : Internet Archive

Clan Crozier (crosier, croser, cros, etc.) is one of
the border reiving clans of Scotland, along with the
Armstrongs, Elliots, and Nixons. Some sources cite the
surname as a sept of the Armstrong clan, but the Scottish
Parliament in 1587 identiﬁed the Croziers as a middle
march clan. [1]

In Fermanagh, as in; Riding Clans in Ulster—Robert Bell 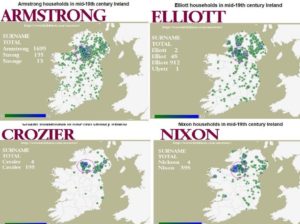 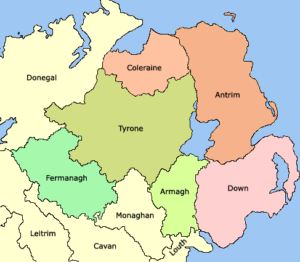 Technically, though, the Armstrong association is not a sept-clan association, but rather an associated family situation. The Nixons, along with several other families like the Crosiers, Crozers, Fairbairns, and Groziers, lived in the lands controlled by the Armstrong Lairds (which happened to be on the border with England). They rode with them on cattle raids, fought in wars with them, and otherwise served as members of the clan.
….. the Armstrong chiefs and their families were hunted down and killed, and the remainder of the families were scattered. Many went to Ireland, and then on to America. http://www.werelate.org/wiki/Surname:Nixon

And finally:
Are Armstrongs a clan?
In 1587 the Scottish Parliament passed an Act “for the quieting and keeping in obedience of the … inhabitants of the Borders, Highlands and Isles”. The Act lists “the clans that have Captains, Chiefs and Chieftans.” So, in the 16th century the Scottish Parliament did not restrict clans to the Highlands of Scotland and included Border families in their description.
http://www.greatscottishclans.com/clans/armstrong.php 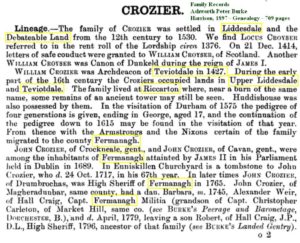 The family of Crozier was settled in Liddesdale and Debateable Land from the 12th century to 1530. We find Locus CROYSER referred to in the rent roll of the Lordship circa 1376. On 21 Dec. 1414, letters of safe conduct were granted to William Croyser, of Scotland. Another William was Canon of Dunkeld during the reign of JAMES I.
William Crozier was Archdeacon of Teviotdale in 1427. During the early part of the 16th century the Croziers occupied lands in Upper Liddesdale and Teviotdale. The family lived at Riccarton where, near a burm of the same name, some remains of an ancient tower may still be seen. Huddishouse was also possessed by them. In the visitation of Durham of 1575 the pedigree of four generations is given ending in George aged 17 and the continuation of the pedigree down to 1615 may be found in the visitation of that year. From thence with the Armstrongs and the Nixons certain of the family migrated to the county Fermanagh. Family Records, Ashworth Peter Burke
Harrison, 1897 – Genealogy – 195 of 709 pages

1 Name evolution
Croyser, Croiser, Crosier, Crozier.
Many of the earlier forms of the name were of Croyser or
Crosier (of Cros), had a common English language switch
of an “y” for an “i”. The name basically was Croyser then
Croiser, which means cross; one who lives near or bears
one.
[2]
Croyser or Crosier has Old French origins, of Roman
Christianity the name Croyser, then Croiser has also
Old Scottish inﬂuence evolved from the Old French of,
Croice, Crois(e, n. Also: croyce, croys(e). [ME. croice,
croyce, crois, croys, croyz (14–15th c.), OF. crois, croiz.
Cf. Croce n.1] An earlier form of the word, which is croy
for the Croyser name; Cro, Croy, n.1 Sc. and Ir. Gaelic
cró fold, hut, Icel. kró sheepfold. Latinized as croa, croya
(12th c.).
[3]
The meaning referring to hut, which developed the name
Croyser is insigniﬁcant in most of England where the
name is based on cross, but given the popularity of the
name in Yorkshire (York Mayor John Croser 1447)
with variants in Sweden, it is felt by people of Scandinavian
origins migrating to what is now Scotland, likely
applied the meaning of hut to Croyser that of hut builder.

Though Croyser may imply a hut builder, in Lincolnshire County, elsewhere Croyse is cross, in various senses;

The Croziers came from Normandy in 1066 with

Through the years, some moved northward
to the southern areas of Scotland where they became
established as a Border Clan. According to Scots
Kith and Kin,
[5]
Clan Crozier was in Liddesdale in the
14th Century.
[6]
Example of Tyndale to Liddesdale-Treviotdale movement;
Clemy and John Croser (Crosier-Crozier), English
Tyndale Rebels resettled to Liddesdale-Teviotdale Scotland
with Clemy Croser, and Robyn (son of Rob of Redheugh)
Elwald, in 1540.
[7]
[4]
1
 William le Gros Earl of Yorkshire (Count of Aumale)
died 1179 could easily be the inﬂuence of
the Croyser of today’s border region being of Yorkshire.
Name similarities exist between,
Le Cros and Le Gros and today’s Crozier and Grozier surnames.
William le Gros, owned Scarborough Castle
.
Borough means fort and is symbolized on the
shield of Scarborough. Scarborough is of AngloSaxon
origins, and people with the surname Scarborough
are known to be from Scarborough. The
Y-DNA of the people named Scarborough was used
to locate an entry point into the British Isles, of
an Elfwald/Elwald.
[8]
Name version of Crozier with
a G; Grosar, Grosars, Grossars (RB Armstrong),
Gros, and Grozier, which OCR (optical character
recognition), sometimes read the upper case C as
a G, is questioned if the document is handwritten,
that it may have been transcribed in the past with
a C transcribed as a G. William le Gros, Count of
Aumale, was a powerful Anglo-Norman baron and
grand-nephew of William the Conqueror.
Le Cros ﬂats (acres) part of Warden manor, about 6 km
(4 mi) west of and within the region of Hexam (St Andrew)
Priority, Northumberland.
[9] [10] [11] [12]
In the Norman Barony surname naming procedures, the
name is taken from locality, and today there is a Le Cros,
France, which corresponds with surname density, location
in Southern France, of Le Cros. Time of surname
adoption, Le Cros (Le Gros) was likely change to Le
Croyser in what is now England. 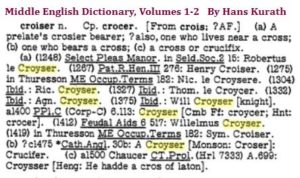  William le Croyser 1264, recorded in Eynsham
Cartulary, in the time of King Henry III,and was
known The Frenchman, 1216 – 1272.
[13]
 Henry Croiser (Croyser) 1266-1272 is detained in
Newcastle upon Tyne, Northumberland prison, in
killing Agnes of Hertrepol, in self-defence.
This is close to today’s Scottish Borders, and likely where
the name Croyser/Croiser, migrated into what became
Scotland in ca. 1320.
 Simon le Croyser April 1327, is recorded in Calendar
of Close Rolls, Peterborough which is a larger
community south of
Crowland/Crowland Abbey as
spelled Croyland.
[15]

William Croyser of Bedfordshire and Buckingham
County is listed in the Patent Rolls 1348-9.
[14]
[16]

….the Elliots, called also Elwods, Elyards, and Elwalds, of
the Alfords who came from near Croyland…
[17]
The Scottish
name Croyser originated as a surname in the region
of Bedford to Lincoln Counties, in reference to people
which built huts.

There were also other forms of the name which became
Crozier. Example: the name Crosar is quite common in
Liddesdale and Treviotdale.
Roughly; from Cros to Crosier with interchanging the “i”
with the “s” the name Croiser, evolved to Crosier, then
becoming Crozier, which means a Bishop’s crozier styled
after the cane of a sheep herder tending the ﬂock.
Basically the name is of Old French likely the name of
a region in southern France of Le Cros with a strong
inﬂuence of the Norman forename William. Evolved
from Cros to Croyser, from meaning
cross, to cross/hut
builder. Then Croyser to Croiser (cross bearer) to Crosier
(bishop’s sheppard’s cane bearer; crozier) to Crozier
meaning
crozier. The name went to Liddesdale, Scotland
as Croyser, then after that the changes from Croyser
to Crosar (becomes Crosier/Crozier) took place in high
Liddedale.

The Croziers, now rarely represented, belonged to an old border clan seated at Liddisdale, Roxburghshire, in the 16th century.

This surname is derived from an official title. ‘the crosier,’ one who carried the bishop’s cross or pastoral staff. ‘Crocere, crociarius’:
Promptorium Parvulorum Way, commenting on this word, quotes concerning the martyrdom of St. Thomas of Canterbury, ‘one Syr
Edward Gryme, that was his croyser, put for the his arme with the crosse to bere of the stroke’: Legenda Aur. (v. the full note,
Promptorium Parvulorum).
Simon le Croyser, temp. 1300. Writs of Parliament. 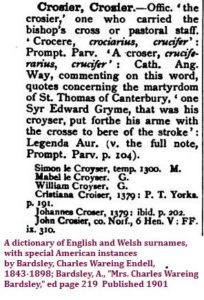 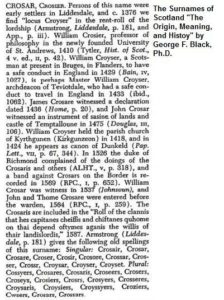 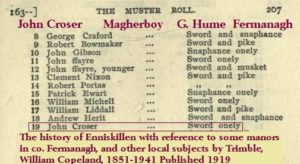 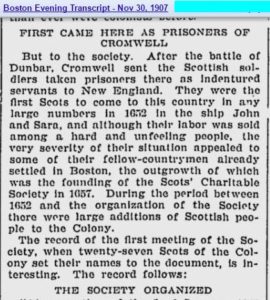 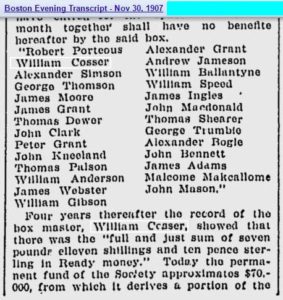 Note; William Cosser, above and below. 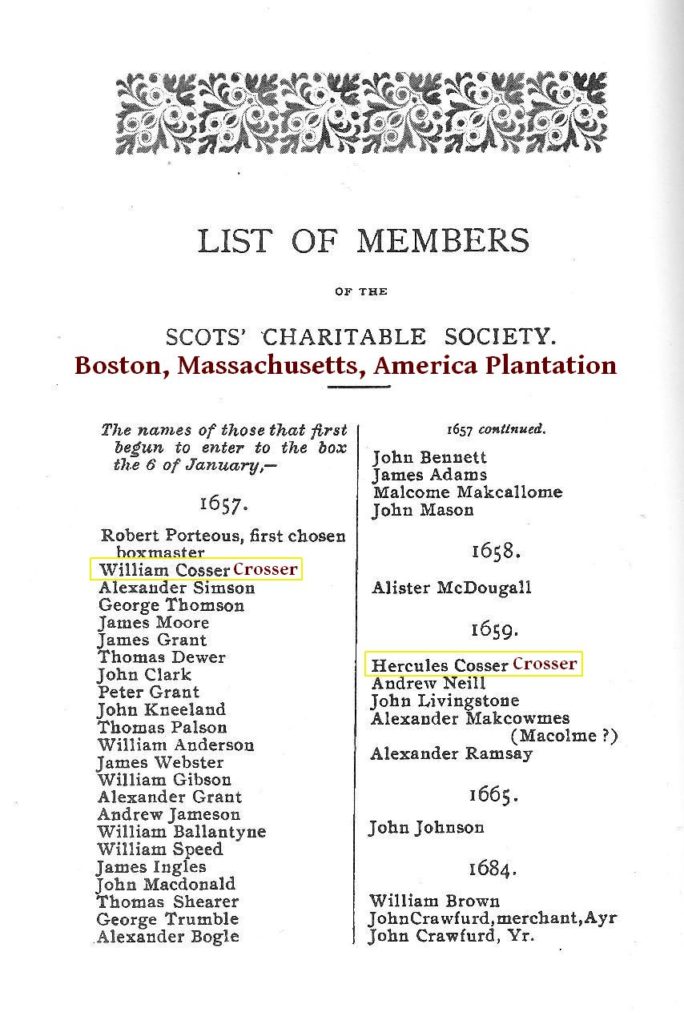 In June 3, 1675 Henry Brown and James Orr , Scotchmen, were residents of Wells, Maine and one given list.

JOHANNES WEYERS @mark !! We do not always have to prove the origin of the word “the” or ” German ” . Their are lots of origins of documents that are often conflicting . We all try to scratch and find those of value and in the process too often even prove ourselves wrong .

Like Mark Elliott JOHANNES WEYERS In order for Elwald to be of the Fairbiarn I-M253 (Fair Bear) story in the genealogy of the children of the bear, ‘wolf’, and ‘elk’, the ‘elk’ can not be a big deer. It has to be a ‘moose’, what the English and German call an ‘elk’. Because Elwald is derived from ‘moose of the forest’. Since the ‘american elk’ is only in the forest, the name created a branch, family. The ‘moose’ in English and German ‘elk’, has a branch family in the genealogy of the family tree. It is the ‘moose/elk’ of the thickets and marsh. Never have seen an ‘American elk’ in the marshes-thicket, but have seen an ‘English-German elk’ in the marshes-thicket.

Y-DNA by Robert P. Elliott, of our Daniel Elliot, of Salem cluster shows the Ker(r) to be a in the group of the closest matches by surname. https://d3tije9h5o4l4c.cloudfront.net/social-photos/2210825?dpr=2&fit=max&h=324&w=590 Image address showing ‘elk’ on the crest of the Kerr arms.; https://encrypted-tbn0.gstatic.com/images?q=tbn:ANd9GcQg3I3LAEyX4jy3CdXxqtNcQ7vVeSLUJbvk1h9Uqt37-hXCI3JERg

Clan Kerr – Wikipedia https://en.wikipedia.org/wiki/Clan_Kerr Clan Kerr /kɜːr/ ( About this sound listen) is a Scottish clan whose origins lie in the Scottish … The name stems from the Old Norse kjarr which means marsh dweller, and came to Scotland from Normandy, the French settlement of the … (note; the People of British Isles PoBI autosomal DNA study excluding surnames groups, the Anglo-Saxon, of the ‘elk of the forest’ DNA, with the Norman DNA, of the ‘elk of the marsh’, are in the same DNA grouping.)

The Ker(Cessford, Duke of Roxborghe of Floors Castle near Kelso, Scotland), Kerr(Ferniehirst, Chief of Clan Kerr a Tory, Lady Buccleuch), and Carr(adult accuser in the Salem Witch trials). Carr, a lady in this blog brought to my attention, her awards for the DAR Daughters of the American Revolution, and reminded me the pride my family that they took place in “stringing up those Tories”, especially when they laugh at “transporting the Scots as slaves to The Colonies”. https://gorrenberry.com/wp-content/uploads/2015/01/SELLING-SCOTS-AS-SLAVES-IS-FUNNY-TO-THE-TORIES-2.mp4?_=1 It was my family being transported, for being Royalists, like the Loyalists to the crown, but ninety years earlier. For me to get the language of my genealogy correct for my particular family is very important, but in order to do proper genealogy you better get it correct for your own family. The only family I basically have to utilize as a model for other families is my own. It is the mechanics which I am trying to teach. Like, the one who has done the genealogy and carries the Y-DNA, is most likely 100% in being correct. Listen to the ladies, ‘the Carr with the DAR awards’, do not kick out the ‘in-laws’, allow for ‘freedom of speech’, something I feel “The Americans”, need to learn from “The Europeans”, because they “The Europeans”, are beating “The Americans”, at their own game. Of course there are in America people from Europe including the UK. 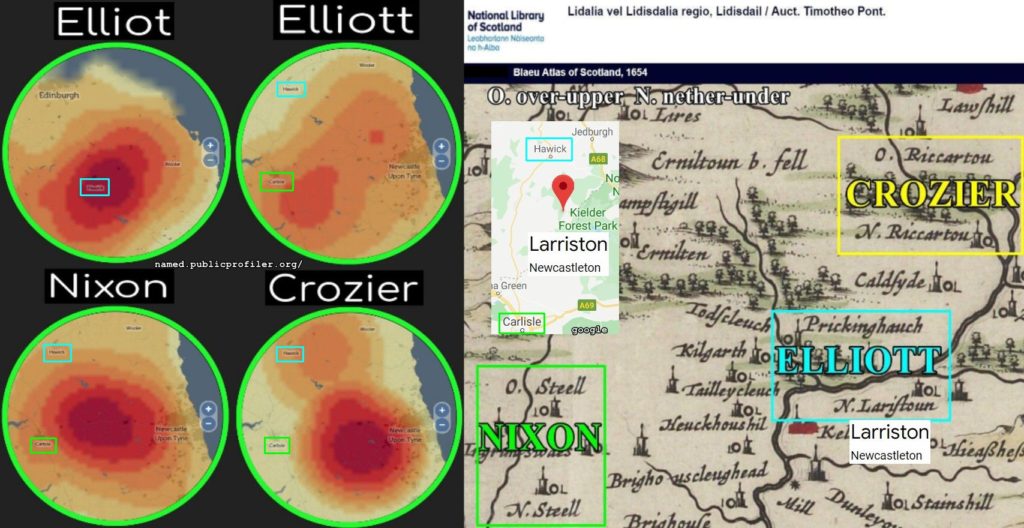